The Story County Sheriff's Office has installed a prescription drug drop box. It is located inside the main entryway of the Story County Justice Center (1315 South B Ave in Nevada, IA). The drop box is available during normal business hours and is free of charge. It is meant to provide community members a safe and easy way to properly dispose of expired or unneeded prescription and over the counter drugs in order to keep them out of the hands of children and others that come in contact with them. Individuals turning in unwanted medications may remain anonymous.

Items unacceptable for drop off include aerosol cans, inhalers, prescription ointments, biohazard or infections waste, hydrogen peroxide, alcohol, thermometers, food items, and supplements. Collection service is only offered to private citizens. The Sheriff's Office will not accept items from commercial entities for destrution.

The facts and statistics about prescription drug abuse are staggering:

The Story County Sheriff's Office is dedicated to battling the epidemic of prescription drug abuse. 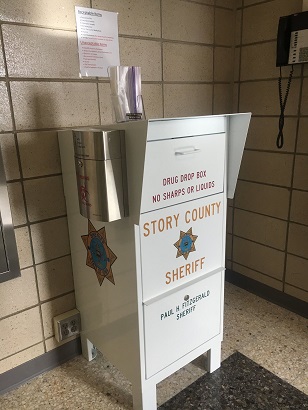 In conjunction with our drug drop box, we also participate in a drug rebate program for the opioid overdose reversal drug Naloxone. This rebate is avaliable through Amphastar Pharmaceuticals.

Effective October 1, 2017, Iowa Attorney General Thomas Miller and Amphastar Pharmaceuticals, Inc., a manufacturer of the lifesaving drug Naloxone, entered into an agreement in which Amphastar has agreed to provide a $6.00 per dose rebate for each Amphastar Naloxone syringe purchased by eligible Iowa Public Entities, including public EMS providers, for the next two years.