This award was initiated in 1988 by The Tribune to honor Olav Smedal, who spent 22 years as an outdoor writer and 17 years as the outdoor editor for the paper. It is presented annually to honor those who, by their actions or communications, have done the most to accurately present to the public of central Iowa excellence in the conservation of our natural resources and outdoor pursuits representing the highest standards of ethics and sportsmanship.

Several years after the initiation of the award by The Tribune, the Ames Chapter of the Izaak Walton League assumed sponsorship of the award. This seemed appropriate, as Olav was a “founding father” and charter member of the local organization. 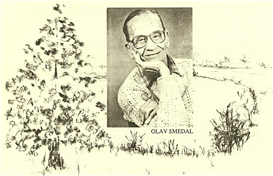 A committee comprised of members from the Ames Chapter of the Izaak Walton League and the Story County Conservation Board selects the annual recipient. A permanent plaque with name plates recognizing all past award winners is displayed at the Story County Conservation Center at McFarland Park, and each recipient receives a beautiful, full-size personal plaque. Funding for the plaques is provided by the Ames Ikes. Promotion of the award program is primarily by The Tribune, which also provides public recognition and publicity for each winner.

Recipients to date are: