Now home to over 90,000 residents, the land that today is known as Story County was originally prairie, with the exception of some groves along the larger streams in the area. It was also home to various native tribes and nations including the Ioway and Meskwaki. In 1846, the boundaries of Story County were established. The county has an area of 576 square miles and is square in shape. The county was named after Joseph Story, a pre-eminent United States Supreme Court justice, in 1853.

The first European inhabitants in Story County came mainly from Indiana, New York, and Pennsylvania. Later, many Norwegians, Germans, and Danes came directly from overseas and inhabited the area. The first large population influx occurred during the 1850s.

Three commissioners appointed by the Iowa legislature selected the location of county seat on June 27, 1853. The location was Nevada, Iowa.

A Snapshot in Time

When the new courthouse (now known as the Administration Building) in downtown Nevada was constructed in 1968, each city in Story County was tasked with creating a history of their community. Each of those histories is linked below. The County also presented a brief history of the goings-on in 1853. 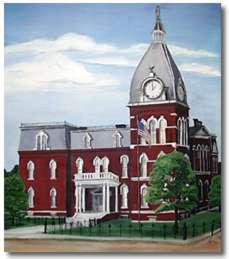