Several areas along the Greenbelt are refuges (no hunting allowed) with most of the Greenbelt designated as public hunting. Nontoxic ammunition is required for all hunting.

There was a time when the locals referred to the river that flows through western Story County as Chichaqua or Chicagua. The spelling was the closest that early European traders and settlers could come to the name given to the stream by Native Americans who had hunted along the valley for hundreds of years. The meaning referred to "a smelly place" perhaps because the frequent mud bottomed oxbow ponds stunk in the summer or possibly because large stands of wild onions grew along the banks. Later European settlers changed the name to honor a smelly animal, the skunk.

There is no archeological record of long-term Indian settlement in the Skunk River Valley in Story County at least in the past few hundred years. There is plentiful evidence that annual hunting expeditions visited the area, though. It is likely that native people used favorite camping sites for hundreds and perhaps thousands of years. There is archeological evidence of very early Native American use that dates to more than 5000 years before present as well as limited evidence of the mound building culture that followed those earliest humans in the area. The primary tribes using the area at the time of first European contact were the Sac-Fox from the southeast and the Dakota from the northwest.

The Skunk River served the needs of early settlers in spite of floods. One of those needs was for recreation. Fishing was popular both as sport and to provide food for the table. Bullheads, catfish, and even northern pike and muskies were present in the river in those days. Soper's Mill with its pond was a popular Sunday afternoon gathering place for families from its earliest days in the 1850's. More efficient drainage systems, growing towns, and increased tillage of the land in the early 1900's ultimately led to deteriorating water quality and more erratic flows. Steam power and low stream flows closed Soper's Mill by 1900. Most of the large game fish were but a memory by World War I.

The hunger for more farmable land and the desire to control flooding brought the US Army Corps of Engineers to the upper Skunk River Valley around 1910. A huge steam-powered dredge began cutting a straight channel near present day Highway 30 that cut across and drained many miles of meandering old river channels and oxbow ponds that filled the broad flood plain to the south. It was those swampy, muddy old ponds and channels that led the pioneers to call the area "The Slough of Despond" and refer to it as one of the most difficult areas to cross in the entire road west.

The channelized river south of Ames was then referred to as the Skunk River Ditch and it remains little more than that to this day. The old river bends and steeper wooded valley walls north of Ames remained much as they were, however. The US Army Corps of Engineers began to promote "improving" that stretch of river with the addition of a flood control dam north of Ames as early as the 1930's. The proposal was last debated in the 1970's when an environmental impact study for the dam determined that projected benefits did not justify the expected cost of the project. The study identified a public "greenbelt" as the most economically justifiable use for the wooded valley. Local support for the dam was weak and opposition was growing by that time. The Corps of Engineers withdrew the proposal in 1974.

The Federal Highway Department began acquiring right-of-way for Interstate 35 through northern Story County in the mid 1960's. The originally acquired right-of-way alignment for the highway took it straight north from McFarland Park for 3.5 miles, crossing the river valley at Soper's Mill and again at Anderson Access. That course was abandoned in favor of a more easterly course that avoided building highway grade across the planned flood control reservoir. The original right-of-way land was transferred to the Corps of Engineers, the next public agency with a need to own the property. The Corps continues to hold the old highway corridor to this day. The reservoir project was deauthorized by Congress in 2003, making the Corps' valley land holdings surplus federal property. Negotiations are underway to have the property transferred to Story County, the next public agency with an interest in the land.

Story County Conservation began promoting the public greenbelt concept as an alternative to a major flood control reservoir in late 1972 and began acquiring land from willing sellers in the valley in 1974. Trail segments were built as continuity of public land holdings developed.  Where possible the trail follows an old stagecoach trail that connected early settlements along the valley. Most of the trails and foot bridges were initially cleared and built by the Federal Youth Conservation Corps and state and local youth employment programs that followed it from the mid 1970's into the 1980's.

The Story County Trails Advisory Committee and others provided thousands of volunteer trail maintenance and development hours over the years to improve and expand those initial greenbelt trails. Public access points were ultimately developed at each river bridge between the Story City Park and Ames' River Valley Park. The Skunk River Water Trail project was initiated in 2005 with a grant to upgrade river access points and improve signage for canoe and kayak enthusiasts thanks to more volunteer work from the Skunk River Paddlers.

The Skunk River Greenbelt could have become a shallow flood control reservoir with extensive weedy mud flats in dry years. Thanks to Story County Conservation and its many supporters it retains its wooded condition and various historic sites such as Soper's Mill, the 40&8 Cabin, and segments of the old stage trail. Wildlife including otters, turkeys, deer, small mammals, and songbirds still find homes in the valley. Channel catfish and small mouth bass can still be caught in pools below the many rocky riffles. The greenbelt continues to offer recreation opportunities to hikers, off-road bikers, equestrians, hunters, anglers, swimmers, bird watchers, canoers, kayakers, and more. The long-term goal of the Skunk River Greenbelt is to protect and connect valuable land and water resources while providing recreation opportunities. The conservation board remains ready to work with willing landowners to make that goal a reality while protecting the valley's historic and ecological values. 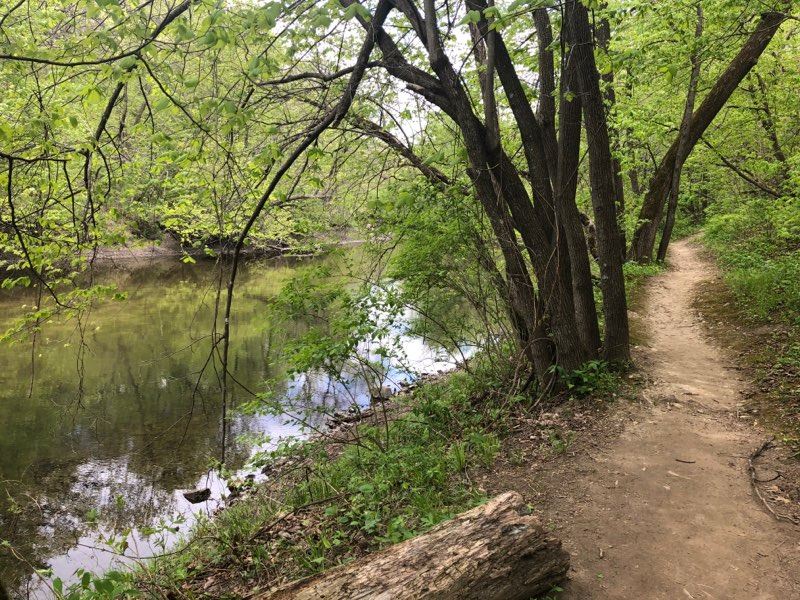 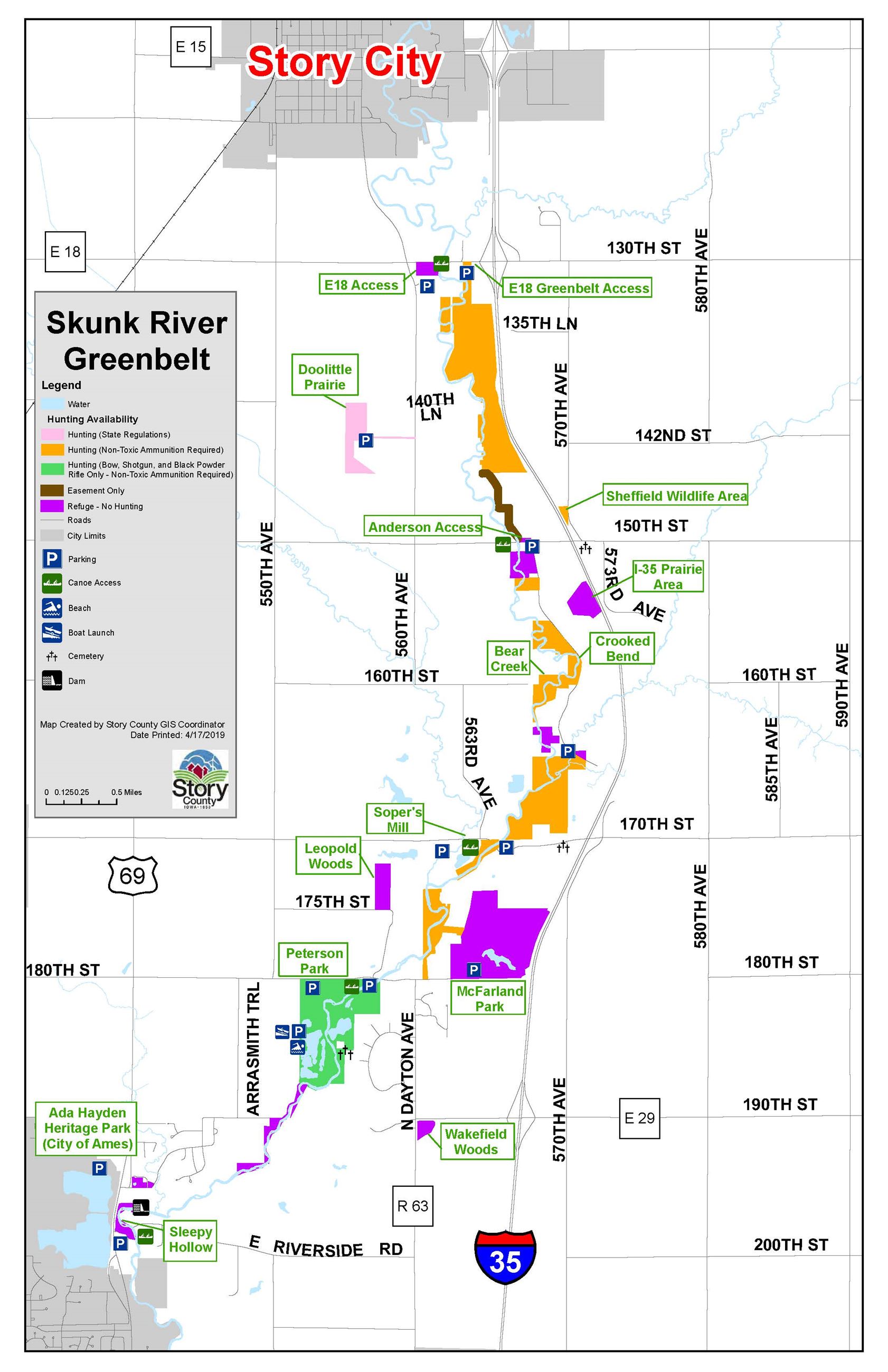